CT contrast media, agents, or dyes are chemical substances used in computerized tomography (CT) scans. Contrast is also frequently used during MRI scans to create cross-sectional images of the body. Contrast CT images provide more detailed information than normal X-ray images because they can show the soft tissues, blood vessels, and bones in various parts of the body. A CT scan may be used to visualize the:

Intravenous contrast is used in CT to help highlight blood vessels and to enhance the tissue structure of various organs such as the brain, liver, and kidneys. “Intravenous” means that the contrast is injected into a vein using a small needle. Some imaging exams of the abdomen and gastrointestinal system use both the intravenous iodine and orally administered barium contrast for maximum sensitivity.

The intravenous CT contrast is clear like water and has a similar consistency. It is typically packaged in a glass bottle or vial. A sterile syringe is used to draw it from the bottle or a power injector is used to administer the contrast. The amount of IV contrast used depends upon the patient’s age, weight, the area being imaged, and heart health.

Sometimes it is necessary to not drink anything for an hour to several hours before the exam. The preparation time varies depending on the actual exam as well as the imaging center’s requirements. Always ask your doctor and the imaging staff where the exam is scheduled for exact guidelines.

Oral contrast is often used to enhance CT images of the abdomen and pelvis. There are two different types of substances used for oral CT contrast. The first, barium sulfate, is the most common oral contrast agent used in CT. The second type of contrast agent is sometimes used as a substitute for barium and is called Gastrografin.

Barium contrast medium looks like and has a similar consistency as a milkshake. It is mixed with water and depending on the brand used, may have different flavors (for example, strawberry or lemon). Gastrografin contrast is a water-based drink mixed with iodine and has a tinted yellow color. When given orally, gastrografin may taste bitter.

If you are instructed to take oral contrast for CT, it is important to eliminate as much food as possible from the stomach and intestines before your scan. Food and food remains can mimic disease when the oral contrast is present. Not eating and/or drinking for several hours before the CT exam is required. The preparation time varies depending on the actual exam as well as the imaging center’s requirements. Patient preparation varies from center to center, depending on a number of issues. Some types of oral CT contrast are taken at home well before the CT examination.

Typically, a patient will be asked to sign an “informed consent form” prior to having a CT exam that uses contrast. This form will outline the potential side effects of the contrast material. Overall, contrast is safe and has been used for many years and in millions of X-ray, CT, and angiogram studies without serious side effects. Most medical professionals agree that the benefits of using iodine contrast typically outweigh the risks. Discuss with your doctor whether or not contrast is right for your CT scan.

Rectal contrast is often used to enhance CT images of the large intestines and other organs in the pelvis. There two types of substances used for rectal CT contrast (barium and Gastrografin) are the same as the type used for oral CT contrast, but with different concentrations. The first, barium sulfate is the most common rectal contrast agent used in CT. The second type of contrast agent is sometimes used as a substitute for barium and is called Gastrografin.

Rectal CT contrast is usually given using an enema where a small plastic tip is inserted into the rectum while a patient lies on their side. This tip is connected to a bag filled with the barium or gastrografin contrast through a tube.  After the tip is inserted, the patient lies flat and the bag is raised above head level to allow the contrast to fill the lower intestines.  During this filling phase, the patient may feel mild discomfort, coolness, and generalized fullness.  It is important to relax as much as possible during this phase until the CT scan is complete.

Like oral contrast, it is important to eliminate as much food as possible from the stomach and intestines before your scan.

Before you book your CT scan, there are a few things to consider, including potential adverse reactions to contrast dyes. While contrast side effects are rare and often mild, patients should always inform the radiologist or technologist if they have a history of allergies (especially to medications, previous iodine injections, or shellfish), diabetes, asthma, a heart condition, kidney problems, or thyroid conditions. These conditions may indicate a higher risk of iodine reactions or problems with eliminating the iodine after the exam. 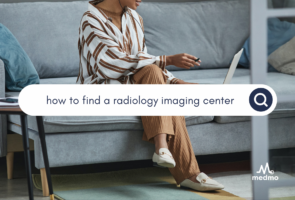 What is a Self-Pay CT Scan?