When health insurance coverage is inadequate, significant costs fall on people’s shoulders for premiums, deductibles, prescription copayments and other expenses insurance doesn’t cover. These costs can create true financial hardships for individuals and families struggling to get by. For some individuals and families, especially those dealing with chronic illnesses, out-of-pocket expenses can total thousands of dollars each month — much more than most people earn.

What problems do underinsured people face?

According to a Kaiser Family Foundation study published in 2015, about a quarter of non-elderly Americans with private insurance do not have sufficient liquid assets to pay even a mid-range deductible ($1,200 for single coverage and $2,400 for family coverage).

More than a third don’t have the resources to pay higher deductibles ($2,500 for single coverage and $5,000 for family coverage). In 2014, an estimated 7 million people were underinsured because of their deductible alone. When families are underinsured, they are at high risk of forgoing needed care and of struggling to pay medical bills when they can’t postpone care. This is on top of already limited or decreased hospital services due to the Covid-19 pandemic.

These care services include radiology scans such as MRIs, CT scans, x-rays, and ultrasounds. Currently, unless you are brought in via an emergency vehicle or under direct and immediate supervision of a primary care physician, these imaging scans are considered non-vital and may be hard to schedule due to hospitals and facilities being filled up with coronavirus patients.

How Can the Underinsured Get Financial Help?

There are several resources to which underinsured Americans can turn to for financial assistance in paying their medical bills.

For individuals who can choose their health care plans, there are a variety of resources available to aid in the decision-making process. Resources such as Healthcare.gov provide valuable information about updating and changing plans, getting coverage, Medicare, Medicaid and CHIP.

Comparing the cost of procedures and medical care between facilities can also be a helpful way to find affordable care. Medmo offers cash pay discounts up to 80% off radiology services for those who wish to skip insurance or will not meet their deductible. 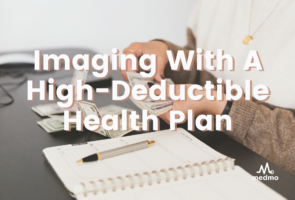 Imaging With A High-Deductible Health Plan

A high-deductible health plan (HDHP) is a health insurance plan with a high minimum deductible for medical expenses but a low premium cost. A deductible is the amount of money you need to pay towards your health services before insurance takes over the bill. Many people choose a HDHP over other insurance options because the premium cost is typically lower than other types of insurance plans. But because the upfront cost is low, there is a high deductible you must pay before coverage kicks in. Is My Mammogram Covered By My Insurance?

The fact is, mammography screening alone isn’t always enough to detect breast cancer. To find out, you may need another mammogram, ultrasound, breast MRI, or maybe even a biopsy. Those procedures are not guaranteed to be covered. This means there are a lot of wide ranges in how much follow-up scans cost and how much insurance will cover.