MRI scans provide incredibly detailed pictures of your bones, joints, muscles, and organs. If you need an MRI, you may have noticed that your prescription specifies “with contrast” or “without contrast.” If so, you’re probably wondering what contrast is used for, and whether it’s safe.

A “contrast” agent helps radiologists see certain structures better. Sometimes two neighboring structures look the same when the scan is performed without contrast, making it difficult to know where one ends and the other begins. With contrast, however, one structure will “enhance” and appear brighter than the other.

Contrast is usually “intravenous,” meaning it’s injected into a vein, or “oral,” meaning you drink it before your test. In some cases, contrast is injected directly into bodily structures, like joints, the bladder, or the uterus.

What kind of contrast is used in MRI?

The contrast agents used in MRI are based on the chemical gadolinium, which affects the magnetic properties of body tissues. MRI contrast has been in use since 1988 and is administered to millions of people each year.

Do I need MRI contrast?

It depends on the problem and the possible diagnoses. Contrast is most helpful when looking for tumors or infections, and it can also help monitor auto-immune and inflammatory disease, like multiple sclerosis. Most recently, contrast has been used in heart MRIs to look for blockages in the coronary arteries, which can cause chest pain.

Gadolinium-based contrast agents are considered very safe and well-tolerated by almost all patients. The risk of an adverse event is about 1 in 2,000, up to 1 in 200.

The most common reaction is mild nausea. A very small number of patients experience allergic reactions, such as hives, and should not receive gadolinium again.

Importantly, gadolinium can not be used in patients with advanced chronic kidney disease or rapidly-worsening kidney function. In such patients, there is a small risk of developing a very severe condition known as nephrogenic systemic fibrosis.

Gadolinium is also generally not given to pregnant women unless truly essential, although the exact risk to the fetus is not clear.

Finally, there has been some recent research that gadolinium can be retained in the brain for several months after an MRI; however, there does not appear to be any negative effect on health.

Ready to get started?

Here’s what you’ll need to schedule an appointment 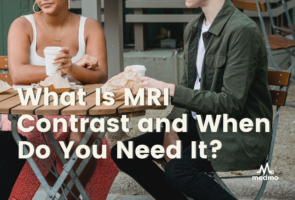