How is Breast Cancer Diagnosed?

Breast cancer may start in one or both breasts, and while it’s sometimes diagnosed after a patient notices symptoms, many don’t have any symptoms at all. So regularly scheduled breast cancer screenings are crucial, as treatments are most effective when the disease is detected early: Patients diagnosed in Stage 0 and Stage 1 have a 100% 5-year survival rate, according to the American Cancer Society.

Patients who are not diagnosed through a routine screening test may receive the diagnosis after reporting symptoms.

According to the CDC, symptoms of breast cancer may include changes to breast tissue and skin such as:

Other symptoms may also include:

These and other symptoms of breast cancer may appear at different stages, and some patients may not experience any before they are diagnosed.

Doctors may use one of several tests to screen for and diagnose breast cancer, but mammograms are the most commonly used for routine screenings. If a doctor sees an area of concern on a mammogram or other screening tests—or if a patient has symptoms that could indicate breast cancer—they will likely order more tests to confirm.

Genetic tests, like those that look for BRCA1 and BRCA2 genes, may also be useful tools in prevention—but these only show if someone has a greater risk of getting breast cancer. They are not diagnostic tests.

By contrast, people with a higher than average risk of breast cancer may have a family history with the disease and/or a genetic mutation. In these cases, higher-risk patients may be advised to undergo certain screenings as early as age 25. Contact your doctor to assess your risk of breast cancer or have questions regarding screening procedures.

To book a scan, visit us at Medmo.com. Medmo helps people schedule radiology imaging tests—such as MRI, CT scans, PET, and more—at nearby accredited centers and identify the payment solution that works best for them.

Ready to get started?

Here’s what you’ll need to schedule an appointment

How is Breast Cancer Diagnosed? 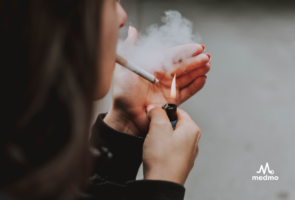 Know any smokers? This test could save their lives.

Smoking increases the risk of medical problems, like lung cancer. Recent research has shown that annual scans can detect tumors while they're early-stage and highly treatable. Unfortunately, most smokers still don't realize screening is available and could save their lives.